A birthmark is a blemish on the skin formed before birth. A little over 1 in 10 babies have a vascular birthmark.[1] They are part of the group of skin lesions known as “naevi”. The exact cause of most birthmarks is unknown, but vascular birthmarks are not hereditary.[1][2]

They are soft raised swellings on the skin, often with a bright red surface, and some may look a bit like a strawberry. They are also known as “strawberry naevi” or as “infantile haemangiomas”. They appear after birth, usually in the first month, and can occur anywhere on the skin. They are more of a problem when they affect the face. The cause of birthmarks is not fully understood. They are a benign overgrowth of blood vessels in the skin, and are made up of cells that usually form the inner lining of blood vessels. They are thought to occur as a result of a localized imbalance in factors controlling the development of blood vessels. Strawberry marks affect as many as one in ten Caucasian babies but only about 1% of Asian and black newborns have them. They are particularly common in premature babies. Strawberry marks are not a sign of ill health, or associated with cancer.

Some types of birthmarks can be hereditary, in the instance that one woman’s many children could have the exact same birthmarks, even though her children vary in age.

Birthmarks are called voglie in Italian, antojos in Spanish, and wiham in Arabic; all of which translate to “wishes” because, according to folklore, they are caused by unsatisfied wishes of the mother during pregnancy. For example, if a pregnant woman does not satisfy a sudden wish or craving for strawberries, it’s said that the infant might bear a strawberry mark.

In Dutch, birthmarks are called moedervlekken (mother-spots) because it was thought that an infant inherited the marks solely from the mother.

Some myths associated with birthmarks are that they are caused when an expectant mother sees something strange, or experiences a great deal of fear.[3]


A number of different types of birthmarks are known that include, but are not limited to, stork bites, Mongolian blue spots, strawberry marks, café au lait spots, congenital melanocytic nevi, and port-wine stains.

While these birthmarks may occur anywhere on the body, they are most commonly oval in shape and light brown, or milk coffee, in color. These birthmarks may be present at birth, or appear in early childhood, and do not fade with age.[3] One or two on an individual is common;[3] however, three or more may be an indicator of neurofibromatosis.[3]

Congenital melanocytic nevusis a type of melanocytic nevus (or mole) found in infants at birth. Occurring in about 1% of infants in the United States, it is located in the area of the head and neck 15% of the time, but may occur anywhere on the body. It may appear as light brown in fair-skinned people, to almost black in darker-skinned people. Coming in a variety of sizes and appearances, they may be irregular in shape and flat, or raised and lumpy in appearance and feel.[3]

A Mongolian blue spot is a benign flat congenital birthmark with wavy borders and irregular shape, most common among East Asians and Turks, and named after Mongolians. It is also extremely prevalent among East Africans and Native Americans.[4][5] Authentic mongolian blue spots do not disappear before puberty and lasts well into adulthood. The most common color is blue, although they can be blue-gray, blue-black or even deep brown.

The Mongolian spot is a congenital developmental condition exclusively involving the skin. The blue colour is caused by melanocytes, melanin-containing cells, that are deep under the skin. [5] Usually, as multiple spots or one large patch, it covers one or more of the lumbosacral area (lower back), the buttocks, flanks, and shoulders.[5] It results from the entrapment of melanocytes in the dermis during their migration from the neural crest to the epidermis during embryonic development.[5]

Among those who are not aware of the background of the Mongolian spots, it may sometimes be mistaken for a bruise indicative of child abuse.[6] 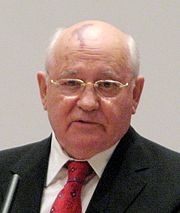 Port-wine stain visible on the head of Mikhail Gorbachev, one of the most famous individuals with such a birthmark.

Port-wine stains are present at birth and range from a pale pink in colour, to a deep wine-red. Irregular in appearance, they are usually quite large, and caused by a deficiency or absence in the nerve supply to blood vessels. This causes the blood vessels to dilate, and blood to pool or collect in the affected area.[7] Over time, port-wine stains may become thick or develop small ridges or bumps, and do not fade with age.[1] Such birthmarks may have emotional or social repercussions.[1]

Port-wine stains occur in 0.3% of the population, equally among males and females.[1][7] They frequently express unilaterally, i.e., on only one side, not crossing the midline of the body. Often on the face, marks on the upper eyelid or forehead may be indicative of a condition called Sturge-Weber syndrome. Additionally, port-wine stains in these locations may be associated with glaucoma and seizures.[1]

Colloquially called a “stork bite”, “angel’s kiss” or “salmon patch”, telangiectatic nevus appears as a pink, flat, irregularly-shaped mark on the back of the neck, and/or the forehead, eyelids and, sometimes, the top lip. The skin is not thickened and feels no different than anywhere else on the body; the only difference remaining in appearance. Nearly half of all babies have such a birthmark.[3] However, most fade by the end of the infant’s first year, and there are no known health problems.[3]

A small hemangioma of infancy

Colloquially called a “strawberry mark”, capillary hemangioma appears as a raised, red, lumpy area of flesh anywhere on the body, though 83% occur on the head or neck area.[8]

Dr. Manish Bhatia is an internationally renowned homeopathy doctor. He is also a well-known authority on Organon of Medicine. He was awarded with the prestigious APJ Abdul Kalam State Level Teacher's Award in 2016. He has also given seminars and webinars in several countries of Europe, Americas and Australia.

He is the author of "Lectures on Organon of Medicine" Vol. I & II (English, Bulgarian, German editions), international best-sellers, which are approved by the Central Council of Homeopathy (India) for BHMS and MD (Hom) syllabus. He is a contributing author to the book "Homeopathy and Mental Health Care: Integrative Practice, Principles and Research" and co-editor of “The Fireside Book of Homeopathy Tales.” He is also editor of the journal "Homeopathy for Everyone"